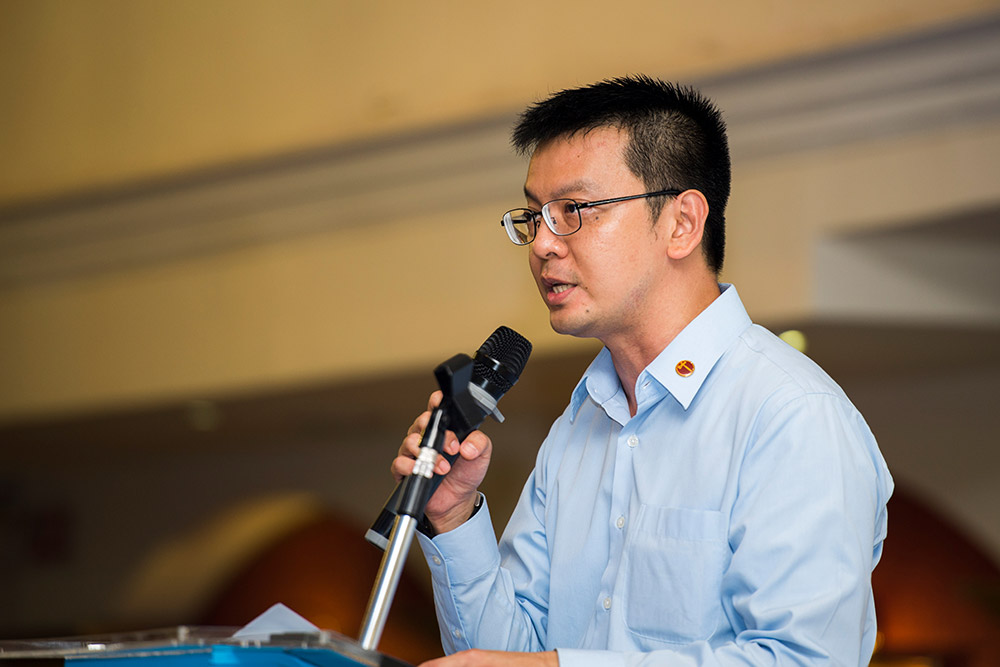 Good evening fellow comrades, fellow Singaporeans. Allow me to speak to you as the Editor-in-chief of the WP60 book, Walking with Singapore. Before I begin, I would like to quickly thank the members and volunteers whom I have had the pleasure to work alongside for the WP60 celebrations. These are two groups of people who have precious skills and, more importantly, strong dedication to the Party and to Singapore.

The first group comprises the Media Team members who have worked their heart out to produce the WP60 Exhibition and Website, the WP60 Book and the WP60 Documentary Video, which is akan datang, which my Media Team vice chair, Leon Perera will speak on in the next speech.

The second group is made up of the tireless workers of the WP Grassroots Committee, especially the Legislative Assistants of the MPs and their volunteers, who have formed the organizing backbone that made possible events such as the WPGC Cohesion, WPGC National Day Dinner and the WP60 Dinner tonight.

In fact, many of the members of the two groups are hard at work even as you enjoy your dinner, on duty in uniform to make sure things go smoothly. Please join me in thanking them for their dedication and service.

The Workers’ Party turns 60 today. Around this time last year, we convened a team of members with research and writing skills to work on a commemorative publication for this milestone anniversary. Our original idea was a coffee-table magazine with a bit of history thrown in and a lot of photographs.

But as we dug into the archives, our direction changed. The turning point, I remember, was at Mr Low’s house. Mr Low had dug up several boxes of documents and items from his cupboard and I drove two of my main editors, Peiying and Edwin, to go look through the boxes and collect the relevant materials. I left them there and came back a few hours later. When I arrived to pick them up, they said, “we need to write a book, we have an important story to tell”.

So, what is this important story we have to tell? I don’t want to spoil the fun for you. Do get the book. Just let me point out two important things. The first is a thread. We tend to think of WP’s 60 years as defined by its three leaders. This was how we started thinking about the history too. We saw a history of three important men with very different personalities: the charismatic David Marshall who could mobilize workers, marching with them on the street; the eloquent JB Jeyaretnam who would ride of the wave of popular support, the people’s champion against the mighty PAP; the quiet Low Thia Khiang steadily chipping away to open up space for a breakthrough in democracy.

It is easy to see the differences. I have even heard people attribute these differences to their ethnic backgrounds. For us, this was not useful. It blinded us to seeing something far more important. This is the continuity, the one singular thread that linked the three leaders, that linked all three periods that have come to define what the Workers’ Party stands for despite the ups and downs of our journey. This is the core value of advancing parliamentary democracy, building political support from the ground up by listening to and living with the people. In short, a party that is walking with Singapore, which is why the title of the book.

There is one more point I want to make. There is a personal twist for me in the book. The book appears to be a history of three leading men, but as you read on you will notice there is an underlying current – this current is made up of the stories of the many ordinary people contributing in extraordinary ways; these are our party members.

The personal twist for me came when we were going through the first draft of the book. It was during the WPGC National Day Dinner in Hougang when we first featured the WP60 Exhibition. Standing there with Swee Bee looking at the panels, she turned to me and said, there is something missing. Where is Jane? It was then I realized there was a big gap in the book – the story of Jane Leong was missing.

Jane had been a backroom stalwart, a strong silent figure working behind the scenes to build up the party. She was the one I worked with when I started volunteering with the party during GE2011 and, in her quiet way, she drew me into the party and guided me on the values and work of the party, on how to walk with Singapore. I am glad that we managed to include her story into the book in the last minute.

This is Jane working behind the rally stage during GE2015. This picture means a lot to me. I joined the party officially as a member in January 2013, just when the Punggol East by-election was going to happen. After the by-election, I started to help Li Lian in Punggol East. She became a role model MP for me with her very warm, sincere and grounded political work. I became very involved with grassroots work. Politics was no longer just about policy issues and political arguments. I worked closely with Swee Bee, whose focus was on residents, residents and residents. When her focus was not on residents, it was on volunteers, volunteers and volunteers. The people must be at the center of our political work.

This is thus the personal twist for me in the WP60 Book. An important history of three leading men turns into a story of three inspiring women. This is the Workers’ Party for me. I just want to end with two more pictures, one taken during GE2011 and another just earlier this year, which to me explain a lot of Mr Low’s success in building up the Workers’ Party to this day. I will leave you to think about it. Thank you very much, enjoy your dinner!